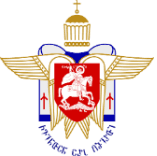 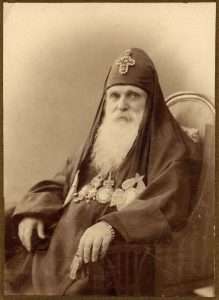 Saint Ambrosi the Confessor (in the world Besarion Khelaia) was born in 1861. He received his primary education at the theological school in Samegrelo and graduated from Tbilisi Seminary in 1885. He graduated and was ordained to the priesthood in the same year. Fr. Ambrosi served as a priest in Sokhumi (in northwestern Georgia) for eight years, at the same time teaching the Georgian language in schools and directing the activity of various philanthropic societies. In 1896 he was widowed, and in 1897 he enrolled at the Kazan Theological Academy.

While in Kazan, Fr. Ambrosi followed both the literary-cultural life of the city and the Georgian national independence movement with great interest. He researched the history of Georgia from primary sources and composed several essays based on his findings. His essay, entitled “The Struggle Between Christianity and Islam in Georgia,” was so compelling to one professor that he recommended that Fr. Ambrosi continue exploring this theme and present his research for a master’s degree.

In 1901 Fr. Ambrosi completed his studies at the Kazan Theological Academy, and in the same year he was tonsured a monk and returned to Georgia. Together with the greatest sons of his nation, he fought tirelessly for the autocephaly of the Georgian Orthodox Church. As a punishment for his uncompromising commitment to this goal, Fr. Ambrosi was exiled to Russia in 1905.

Upon his return to Georgia, he was elevated to the rank of archimandrite and appointed abbot of Chelishi Monastery. Chelishi Monastery had at one time been a center for theological education in Georgia, but many years had passed since then and the monastery’s student body was rapidly shrinking. Before long it would be completely deserted. But with the blessing of Bishop Leonid of Imereti (later Catholicos-Patriarch of All Georgia), St. Ambrosi gathered a number of gifted young people to study at the seminary and began to instruct them in chanting and the reading of the Holy Gospel.

St. Ambrosi devoted much of his time and energy to finding and restoring the old manuscripts of Chelishi Monastery. Once, while passing through the monastery yard, he heard a muted sound coming from beneath the earth. He began to dig at that place and discovered an ancient copy of the Holy Gospels. It was the “Chelishi Gospel,” a famous Georgian relic from the 9th or 10th century.

Soon St. Ambrosi joined the Tbilisi Synodal Council and was enthroned as abbot of Holy Transfiguration Monastery in Tbilisi. But in 1908 he was accused of conspiring in the murder of the exarch Nikon and deprived of the right to serve in the Church. The prosecutors exiled him to the Holy Trinity Monastery in Ryazan, where he spent over a year under strict guard. In 1910 St. Ambrosi was acquitted and again permitted to serve in the Church.

In 1917 Archimandrite Ambrosi returned to Georgia and rejoined the struggle for an autocephalous Georgian Church. Within a few months the Church’s autocephaly was proclaimed. He was consecrated Metropolitan of Chqondidi, later to be transferred to the Tskum-Abkhazeti region. In 1921 St. Ambrosi was enthroned Catholicos-Patriarch of All Georgia.

The Soviet government began to persecute the Church not long after St. Ambrosi’s enthronement. Some 1,200 churches were plundered, converted for other purposes, or destroyed. A great number of clergy were arrested, exiled, and later shot to death. 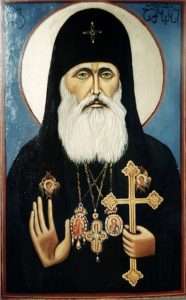 On February 7, 1922, Catholicos-Patriarch Ambrosi, the spiritual father and chief shepherd of his nation, sent a memorandum to participants in the Conference of Genoa[1] in which he defended the rights of the Georgian Church and nation. Every word of his appeal was penetrated with distress for the fate not only of his motherland but of the entire human race. St. Ambrosi assured his audience that a nation and government deprived of Christian virtue would have no future and pleaded for help in this time of misfortune.

The receipt of such a memorandum was unprecedented for the Bolshevik regime, and in response the officials had St. Ambrosi arrested. Nevertheless, he fearlessly criticized the government’s complaisance with acts of crime, injustice, and sacrilege.

In response to one of the Bolshevik interrogations, the patriarch asserted, “Confession of Faith is a spiritual necessity for every nation — persecution increases its necessity. Faith deepens, being contracted and accumulated, and it bursts out with new energy. So it was in the past, and so it will be in our country. Georgia is no exception to this universal law.”

St. Ambrosi spoke these remarkable last words to his persecutors: “My soul belongs to God, my heart to my motherland, and with my flesh you may do whatever you wish.” The court sentenced the Catholicos-Patriarch of All Georgia to seven years, nine months and twenty-eight days in prison.

At the end of 1924 St. Ambrosi and the other members of the Synodal Council were granted amnesty, but their grave experience had already taken its toll. The Georgian flock lost its faithful shepherd in 1927.

In 1995 the life of Catholicos-Patriarch of All Georgia Ambrosi (Khelaia) was discussed at an expanded council of the Holy Synod of the Georgian Church. In recognition of his great achievements on behalf of the Church and nation, Ambrosi was canonized as “St. Ambrosi the Confessor.”

[1] In 1922 representatives of thirty-four nations met in Genoa, Italy to discuss the economic reconstruction of Central and Eastern Europe and to improve relations between the Soviet Union and Western Europe.